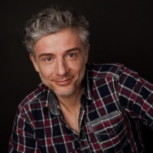 After training in scriptwriting and production (UCLA, CEEA) and initial experience of collective writing on series ( Les Bleus, Odysseus, etc.), Marie Roussin took part in the creation of the series Cut! (France Ô) and then joined Frédéric Krivine's writing team on Un Village Français (France 3), from season 5 to the end of the series. She then participated in the scripts of various popular French series, notably season 6 of Fais pas ci, Fais pas ça (France 2) and Hôtel de la Plage (France 2), before returning to the United States to work on season 3 of the series Borgia (Canal+) under the writing direction of Tom Fontana. In 2015, she became the writing director for the first two seasons of the French adaptation of Les Bracelets Rouges (TF1). She is also the creator and showrunner of Mixte, the first French series on Amazon Prime, which will be released on June 14, 2021.

While working in the police force, Olivier Marchal was inspired by the detective stories that marked his youth to write short stories and poems. It was when he sold his first scripts that he left the police force to devote himself to his career in the audiovisual sector. However, he did not leave his first vocation completely behind, and over the years became one of the figures of the "cop" character on French television, whether as a writer for Commissaire Moulin (TF1), Central Nuit (France 2), Flics (TF1), Braquo (Canal+), Section Zéro (Canal+) or as an actor for Police District (M6), Les Rivières Pourpres (France 2) or more recently La Promesse (France 2).

In this episode, Marie Roussin and Olivier Marchal look back at their careers and their writing processes, which reflect the plurality of authors' techniques. They also discuss the importance of quality popular series, great sagas and their strong and diverse characters.