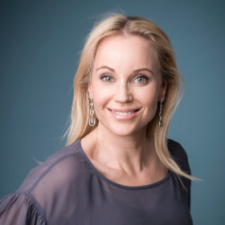 Sofia Helin is one of the most important faces of European fiction with The Bridge. She has recently chosen to also be a producer, in order to give the means to strong projects, offering a new place for female characters to emerge. The recent series Heder , which she co-created and co-produced with three other actresses, is a first emblematic example: it features four determined female lawyers who are engaged in a relentless fight against sexual crimes and relentlessly denounce patriarchy. She will appear this year in the historic Norwegian series Atlantic Crossing and in the second season of the Australian series Mystery Road .

Heavily involved in the Swedish MeToo movement (#tystnadtagning), she discusses the weapon that drama represents in the imperative evolution of representation and attitudes during her interview moderated by Caroline Palmstierna (consultant, Shoot for the Moon).